Although most of the visit would be headquartered on the far west side of Beijing, for the three days that we’d be seeing

the sights in the historical district, we stayed at the Red Wall Hotel, conveniently located near the Forbidden City and

affording us an opportunity to be closer to the places we’d be visiting. 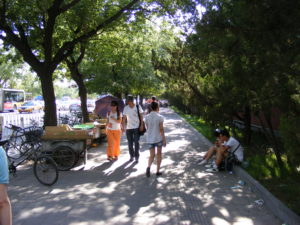 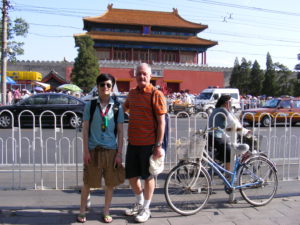 really only a few blocks from the hotel. We walked down the street and took a photo when we were across the street

from the North Gate. However, since Tiananmen Square was at the South gate, we had to circumnavigate the entire

Forbidden City compound to enter on the other side, which was about a mile walk. 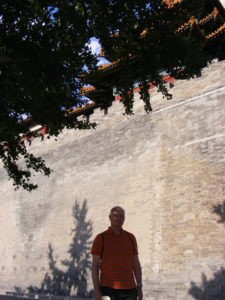 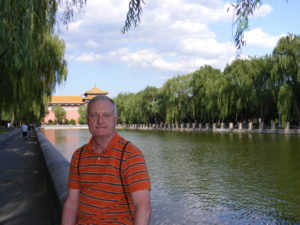 We snapped a few photos of the grounds, the moat, and the scenery along the way before arriving at the other side Where the South entry to the Forbidden City opens into Tiananmen Square.

Against the wall and over one of the entry gates is the iconic photo of Chairman Mao. 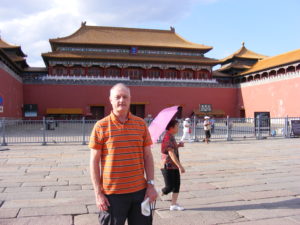 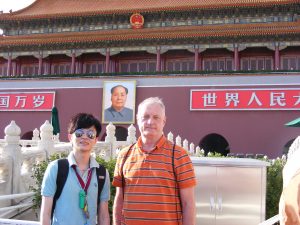 White carved stone gates, walls, staircases and other ornamental objects are everywhere. Although this day was spent on the outside of the Forbidden City (technically called the palace Museum, generally only westerners refer to it as the Forbidden City). The square is huge. It’s bordered by the National Museum on one side with very large red signs on the front. That would be a trip for another day. Then there was Chairman Mao’s Memorial with the two tiered roof on another side of the square, where the Chairman’s body remains on exhibit several hours per day. 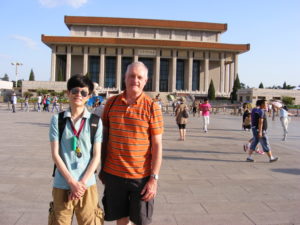 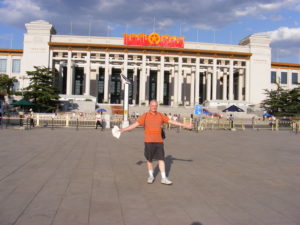 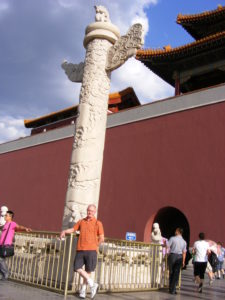 There are some government buildings on the third side where the national Congress meets. There were thousands of people milling around, monuments, gardens and other memorials covering the square, including the Monument to the People’s Heroes. This huge structure is in the center of the square. As I walked through the area around the Forbidden City and the Square there were occasionally security guards who were mostly quite young, standing at attention for hours a day, looking exhausted. There was one guard at the Monument, standing with rifle at arm as if someone would try to sneak off with the monument in their backpack. I think is a great honor to serve as one of these guards. There is a guard’s dorm nearby where some off-duty soldiers were playing a kickball kind of game in their spare time. 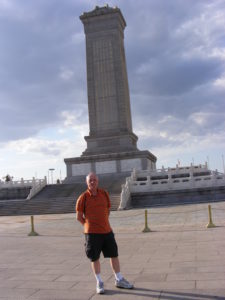 The far south side the square opens into Tianmen Street, a popular shopping street with a big entry gate, lovely shops

and a trolley car that ran back and forth on the tracks down the center of the street. 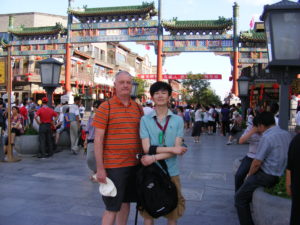 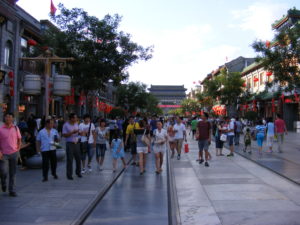 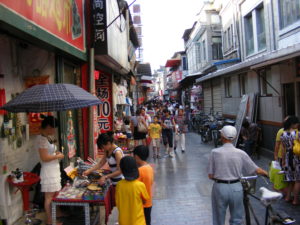 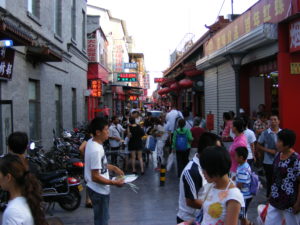 After walking through some of the side streets with vendors selling countless items one cannot live without and just before dark we went back over to the main shopping street which is literally one fine restaurant after another, so we stopped in front of the few more famous (and more expensive ones) for a quick photo. Among the pricey and famous eateries are many smaller and equally delightful places to get certain specialty items like dumplings and soups. 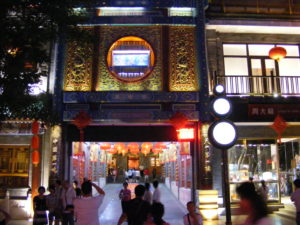 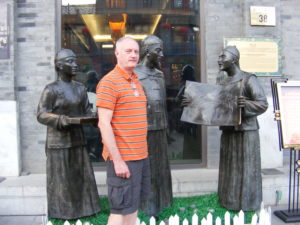 We finally arrived at a favorite spot of my host where some of his friends joined us for dinner. There was a set of statues in front of the restaurant of 3 Chinese men looking at the menu. The place had apparently been there for many, many years albeit through several reconstructions and incarnations. The entry was a doorway of hanging beads that were tied back. There was a boy at the entry whose job it was to see that the beads remained neatly tied. He re-tied them several times during our visit. Just down the street was a world class restaurant that served the famous Peking Roast Duck, but I just took a picture, far cheaper than eating there. Besides, I’d have a roast duck adventure on another night. 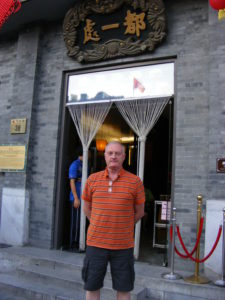 I sampled some things and liked the steamed dumplings, but not the flavorless rice soup, as the pictures indicate 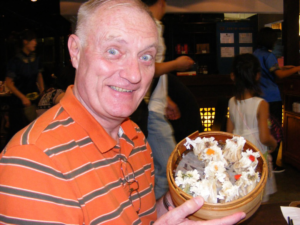 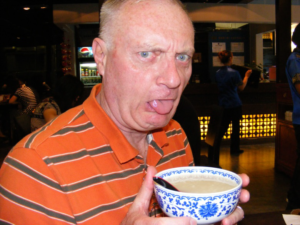 I also discovered a delicious local beer, Yan Jing, in a large green bottle that became my drink of choice for the

remainder of the trip. I later learned that Yan Jing was the official beer sponsor of the 2008 Olympics, is the biggest

brewery in Asia with a plant that covers 550 acres. 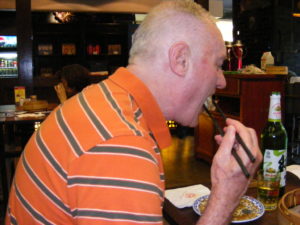 As darkness fell, the buildings, street, and gateway became brightly and colorfully illuminated and was quite spectacular. 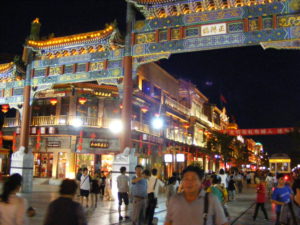 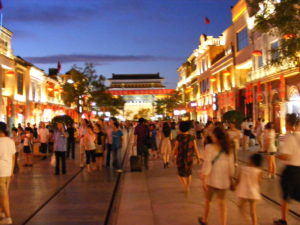 Most of the building were well illuminated and I got a few night shots as we walked back to the hotel. 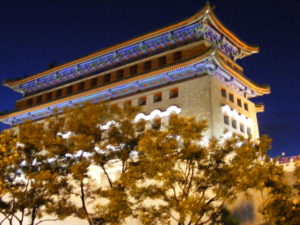 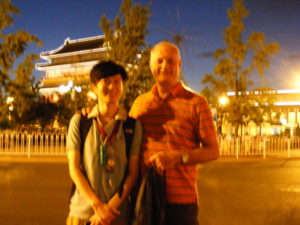 This was a full day and an early night. On this warm summer night, after hours in the sun and seeing history before our eyes, Beijing became a truly magical place.