The tour guide explained to us that after the morning visit to the Great Wall, we’d make a series of stops. This is not unusual. On almost every tour of any part of China, you’ll wind up lengthening your excursion by stopping off at several places along the way. Although the goal is clearly to sell you something, I found that I enjoyed most of the stopovers and was able to restrain my spending. Usually, I did get some small token from the places. So I had a souvenir, and a story to go along with it, something I would not have had if I’d limited my shopping the general merchandise tourist shops. The first of which was a jade factory where many items of jade were manufactured. Jade is extremely popular in China and comes in many varieties of quality and purpose. As our van pulled away from the wall, the inbound traffic was incredible. Our drive was about 30 minutes to the Jade factory where we could see items being made. 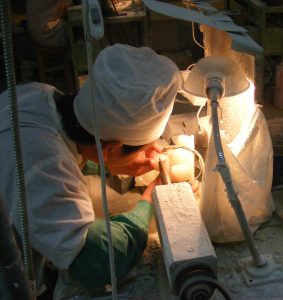 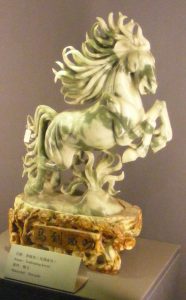 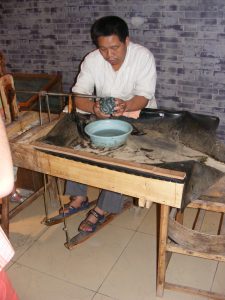 After walking through the factory, there was (of course) a trip to the massive showroom, where we could purchase something. In the showroom there were many incredible jade carvings, some huge and priceless. I’ve never seen such an amazing collection of artifacts, all from jade and in many cases, intricately carved from a single piece of stone. On the attached photos, I am showing you some high resolution pictures of the items. Please magnify them to take a closer look at the artwork and craftsmanship. 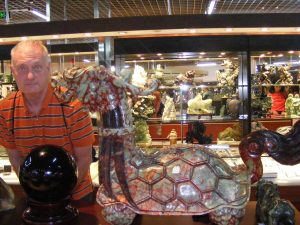 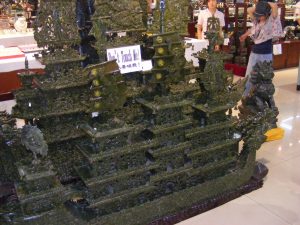 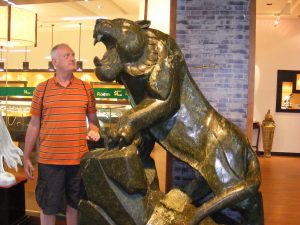 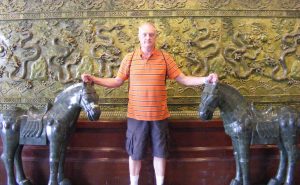 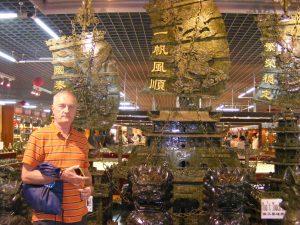 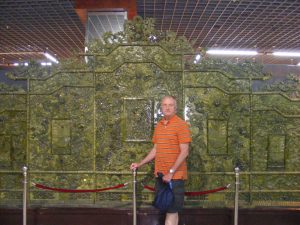 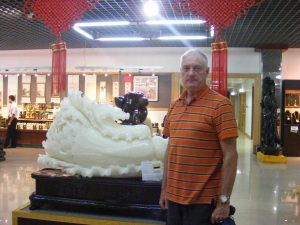 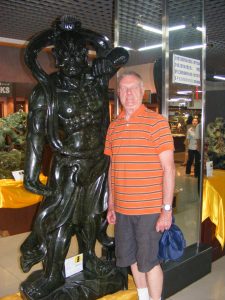 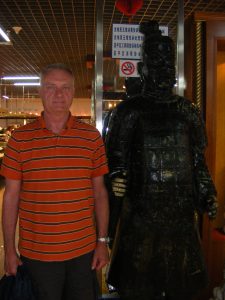 Following the jade factory, it was lunchtime, so next stop was lunch at a huge government operated restaurant along the highway. It was a beehive of activity with dozens of tour busses coming in and out. The lunchroom had large round tables seating 10-12 people each. The place was massive and set up to serve several hundred tour busses a day. The meal was also a very traditional Chinese meal with 8 or nine entrees served on a giant lazy-Susan in the center. Our table seated 10 and there was more than enough food for all and it was quite good.

It is also quite traditional to take photos of food and meals in China. Almost everyone I met there took a photo of everything they ate and posted it to their social media followers. Photos of meal platters would be posted globally before the first bite was taken. For this reason, I opted to NOT take any food photos at this stop.

Back to the bus… 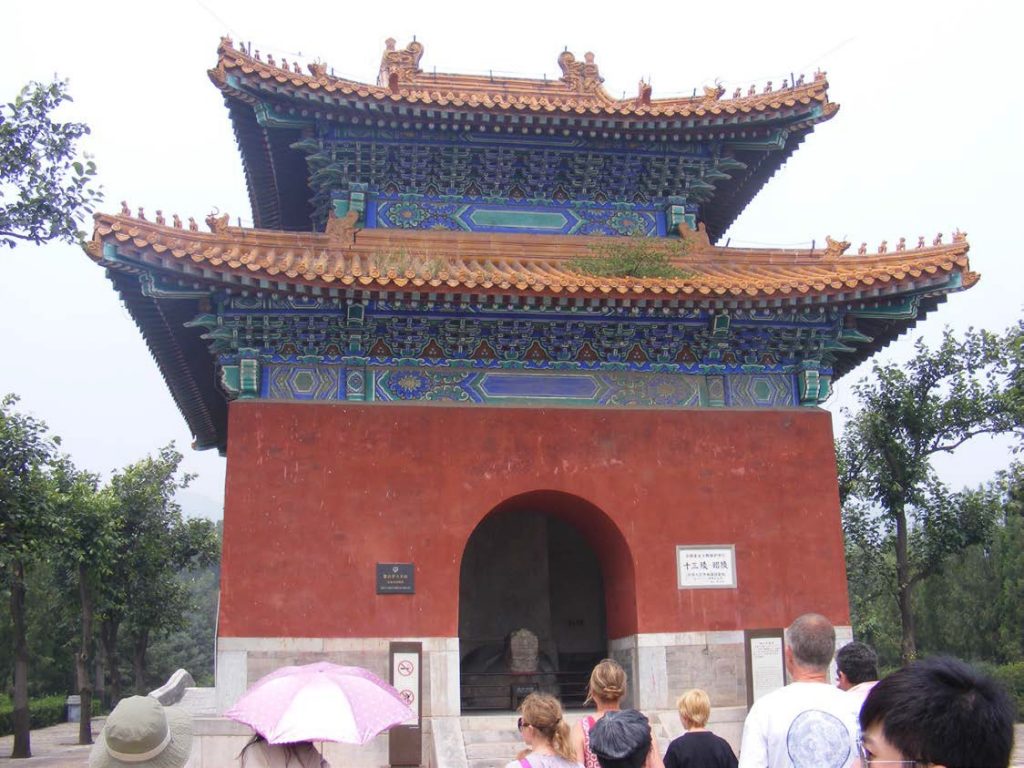 It’s really a long sweeping set of stairways passing through some temples and bell towers. 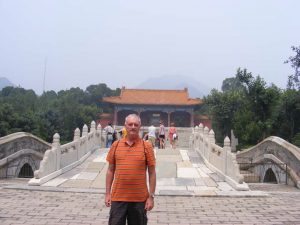 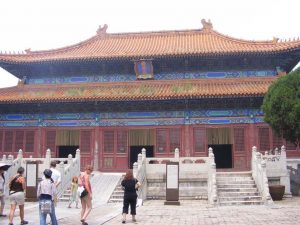 The largest building at the top is a meeting and banquet hall set up with typical furnishings and bells and a striking blue ceiling. 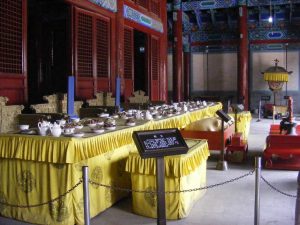 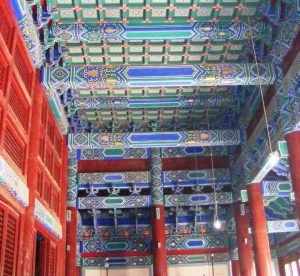 The actual tombs are underground and spread throughout the area. Only one has been excavated.

Our tour guide had a pink parasol and spent some time here speaking with Bo, since he was the only Chinese person in our group. It was a relief for him to get to speak Chinese for a while as it was a relief for me to speak English with the British couple and Danish family for most of the day 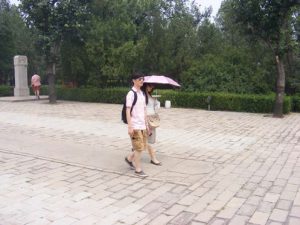 Our next, stop would be another factory where the famous cloisonné pottery and decorative items were made. Once again, we were afforded an opportunity to hear about the manufacture and watch the craftsmen making these items. I purchased a small acorn-shaped container here. 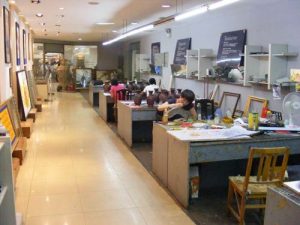 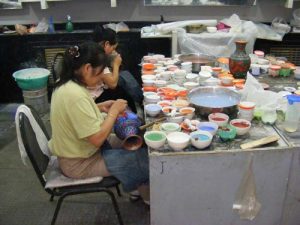 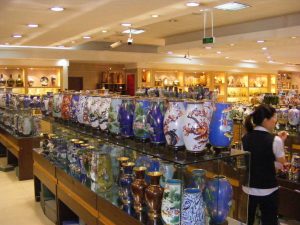 Quite beautiful, and unlike most souvenirs, useful and decorative…also with a story behind it.

Back on the bus…

Next, we stopped for a look at the athletic complex home to the Asia Games. We were treated to a foot massage by students at a massage school on the premises. This part of the tour was kind of a surprise, but refreshing given all the walking and climbing and shopping. 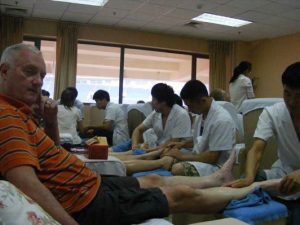 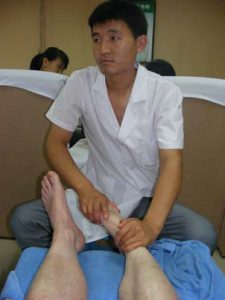 Next, we weren’t done yet. After the massage we headed to a nearby silk factory where we were shown how silk is made from worm to finished product. As usual, we wound up in a vast showroom of silk sheets, suits, shirts, bolts of fabric and all manner of silk apparel and items. 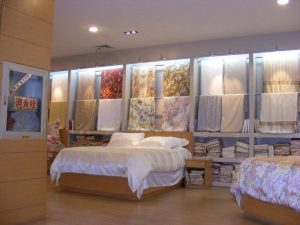 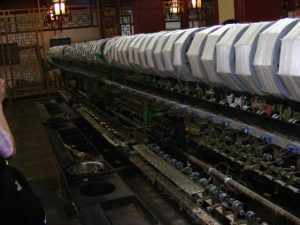 The factory was upstairs in a huge traditional looking Chinese building with a large statue of Qin, China’s first emperor who unified China (221 BC) on the stairway. 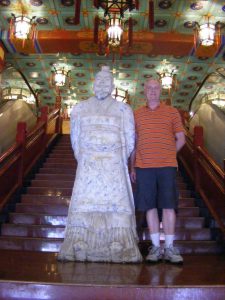 The final stop of the day was at a tea palace, where we were given an explanation of the proper etiquette of tea brewing and the significance of tea in Chinese culture and the tea ceremony. Obviously this experience was followed by ample opportunities to purchase some exotic teas as well as tea paraphernalia. I got two tea-making tea cups, one for myself and one for my friend who is a regular tea drinker and was back home in NYC watching my cat during my journey.

Finally, the van returned us to the hotel at 5:00pm. This had been a really full day with the Great Wall, Ming Tombs, a lunch, a foot massage, and visits to tea, silk, jade, and cloisonné factories. The whole day tour cost only 180 Yuan per person, about $30.

Although we’d checked out of the hotel in the morning, they kept our luggage for us while we were on the tour. Bo had called ahead of time and had our regular driver meet us at the hotel to take us back to the apartment.

I am sure we must have had dinner somewhere that night, but it escapes me. There is a very nice shopping mall near the apartment that, of all things, has a Papa John’s pizza restaurant. We may have just thrown in the towel and gone there.

We were exhausted following four consecutive days of trooping around Chinese benchmark locales.