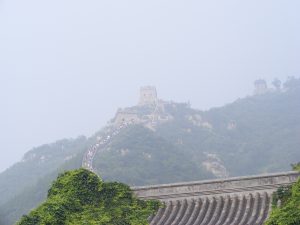 This would be the last day in the hotel. My entire trip was planned to be done without any formal tour guides or excursions. The only slight exception was that the hotel offered, through its tour desk, a daily trip to the Great Wall. When I made the hotel reservation, I signed up for the day trip, as well.

We checked out of the hotel early in the morning and the van carrying about 8 other people from other hotels, picked us up at the 7:00am. We had 2 Korean girls, a Danish family of 5 (with 3 small children), a Japanese girl, an older couple from Hastings, U.K. and a man from Albania. Everyone spoke English. There was a driver and an English-speaking tour guide. She explained where we be going and what the day schedule would be. The first stop would be Badaling, where a section of the Great Wall comes nearest to Beijing. First glimpse of the wall through the morning haze was amazing.

Our drive to Badaling was about an hour through relatively unremarkable rural scenery. We did start to notice a change in the topography with the presence of hills and small mountains. My first glimpse of a wall section was as we turned off the main highway and I spotted a wall section atop a mountain. Upon arrival at the parking area at 8:20am, we were told by our guide that we’d be on our own for two hours and to meet back at the van at 10:20am. The parking area opens directly to a series of walkways to ascend to the top of the wall. The goal here is to walk along the top as far as you like, within the time allotted.

There are many sections of the Great Wall. It stops and starts over a thousand miles of territory. Some of the wall sections are connected to each other, some are not. There are, therefore, many Great Walls. Arriving at the Great Wall early would turn out to be a great idea since the influx of tourists increases remarkably as the morning wears on.

The wall is wide; however the section where we were is on a sweeping uphill grade with very steep steps, making the trip more of a climb than a walk. We could see a steady stream of people trekking up (or down) the wall.

The wall here is near a river and extends from the river upward to the top of a mountain. At the lowest part at the river, a section of the wall was a bridge with several taller buildings built up and over the river. I presume this was a primary staging area for supplies being shipped to the wall as it was being constructed and to supply to soldiers who patrolled the wall, keeping the Mongols away.

There as a tower at the top and the wall took a right angle and went toward another tower and then, still another tower along the top of the mountain. There are, along the way various courtyards and places that could have served as barracks and guard posts.

The heartiest and most athletic could perhaps make it to the second tower and back within the two hours. No one in our group did. In fact, few made it to the top of the mountain to the first tower. I actually didn’t come to China to “climb” the Great Wall…I came to “see” it and spend some time walking around it.

The weather was sunny, but there was a lot of morning fog and haziness, adding an eerie quality to the landscape. I did take a few photos off in the distance to see portions of the Wall and well as looking up and then looking back down from the section on which we were walking/climbing. The countryside is dotted with other ancient buildings, temples and out-structures that can be seen from the wall, although exactly what they are is not explained.

At the base of the wall near the parking area is a large white stone with the official name of the wall section cut into it in Chinese calligraphy with everyone clamoring to get their photo in front of it.

We climbed about halfway up and them back down to explore some of the other building connected to the wall.

As our van pulled away from the wall, the inbound traffic was incredible. Many newly-arriving tourists opted to disembark from their tour busses a mile or more away from the wall. It was total gridlock. Had we not come as early as we did, we may still have been there. Keep in mind, as I said before, there are many Great Walls and where you are in China determines what Wall you will be likely to visit. Many sections are vastly remote and accessible only by special tour. Other sections are near larger cities and smaller villages offering accommodation and amenities without the vast crowds. Because the wall was built over many centuries, where you decide to visit it may also alter the building materials, the technology, and the purpose for the section. I was in Beijing and this part near Badaling is the closest to the city. It was also summer, Chinese tourist high season. Should you visit Beijing in Fall, Winter, or Spring, the crowds would be far less.

OK, I did it. Made it to the Great Wall.